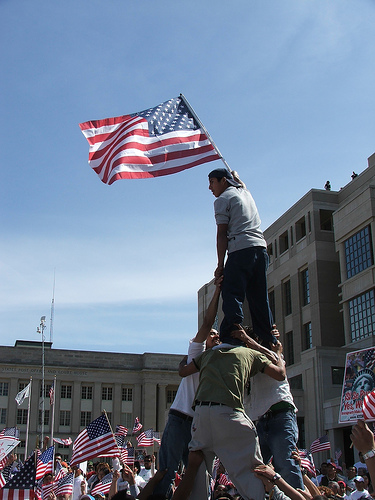 From his humble beginnings in a small town of the Czech Republic, Sumsky enriched his character through education and hard work. After receiving his degree and fulfilling an obligation to the nation’s armed forces, Sumsky traveled to a farm in Italy where he would spend several months picking apples just to earn enough money to buy a flight to the United States. Because getting to the USA was a “Have To” for Tomas. In 1997, he arrived in New York City with five hundred dollars to his name and no English language skills. After just five days, he traveled to Chicago and while spending the next eight years in a succession of careers from construction cleanup crew to re-modeler, property manager, and custom homebuilder Sumsky learned a great deal about American culture, the language, and a brand new life that was only just beginning. He also learned the power of “Have To”.

It was 2005 and I was successful and happy. I awoke every day with the promise of great fortunes only a meeting or a handshake away and I was living in a perpetual paradise I had created. As the owner of an established remodeling and custom homebuilding firm and with the then-current state of the market, real estate deals were a dime a dozen. My wife Ewa and I were enjoying the fruits of our personal success: luxury cars, fancy meals, expensive sports hobbies, exotic vacations, and an affluent suburban lifestyle.
In business, many people I knew were just making ends meet, but I continued to be met with more and more success. Real estate contracts were all lining up in my favor, my reputation was only getting better and I was unstoppable. It was as if money was coming at me from every direction. As my business continued to grow, I felt that I had finally achieved my goals and was leading the kind of life I had always wanted. At the age of 29, I was living the American dream with plans to retire at 35.

In 2007, the fall began. In business, housing contracts that at one time were signed and processed without second thought were now being cancelled left and right. Coupled with the demise of the housing market and a nationwide credit crisis. I was in deep, with no visible way out; however, my denial and resistance in facing the situation only kept me from seeing reality, and forced my circumstances to worsen.
Not only was my dream life disappearing; my bills were piling with great speed and due to the lack of profits, I had little to no resources to cover these expenses. No matter how badly I wanted to avert my worries with a positive outlook, I could not escape the dismal reality of what had become my life. I did not want to believe that this could happen to me.

It took a few months into 2007 for me to fully recognize how far I had fallen. From where I had been just over a year earlier, it seemed I had hit rock bottom. I spent a great deal of this year in despair. Whatever could go wrong went wrong, from the emptiness of my properties to my delinquency on business expenses. Winter came early and cast its hard frost over my life, like a final seal of disapproval. For the first time in my life, I did not enjoy Christmas. I looked at the smiles of other people but could not feel the warmth. I pretended to project happiness onto others and put on a front of strength when I was in public. Shrouded in the darkness of my state of mind was a business going downhill and with it, my dreams. As the end of the year encroached, creditors were calling on a daily basis and my bank accounts were empty. The end of my dream life was here…I “have to” design a solution!

I sat down with a pen and paper and started a balance sheet. I summarized all my assets, debt and that little bit of cash we had available. I did my homework extremely well. The next morning, I called my friend who was aware of my situation and had always been there when I needed help. We went together to the car dealership, my first big step in buying more time. My luxury cars were all paid for; so I found a new inexpensive car, signed the lease for it the same day and traded in my luxury vehicle. I walked away with a three year lease and a nice, juicy check. I had just bought myself two more months in our home and payment for some business expenses.

So how is it almost a year later that I’m still in my house, current on my payments and writing my book: Rebound? During those next two months, I had to come up with some kind of strategy and a definitive goal. Within the first few days, I was canceling everything without a binding, long-term contract. I lowered prices on my homes and renegotiated terms with my vendors. My credit score had already weakened and I knew that it would take time to repair that. I did not focus on that anymore. It was secondary. My main focus was and needed to be, the whole picture rather than the individual parts. I was monitoring my daily expenses and was forced to start choosing bills to pay. My wife was extremely helpful to me with her encouraging attitude. This was giving me even more power and motivation to stay on track.

My situation was very stressful but with logic and focus I have used the motivation of “have to” to Rebound. If you would like to read my book visit: http://www.reboundbook.com

I was backed up against the wall and I figured out what I had to do to survive financially!!

Bag It!
What is The Zen of Have to?
Driving and Texting!